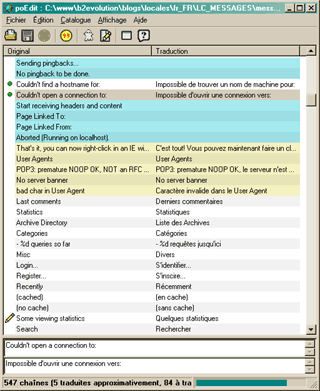 As I said recently, i18n and l10n are best carried out using the right tools...

I've looked around somewhat and it turns out there seems to be an absolute reference in the area: the GNU gettext framework.

Cool beans for the developers...

In a nutshell, here's how it all works:

There's quite a lot to be said about how relevant this system is, but it has quite a few benefits:

Cool beans for the translators...

poedit will also let you add comments or read those the developer may have provided in the .POT file.

And the best of all: poedit will show you all references of a given string in the source code. Even better, it will open the sources and highlight the occurrences for you. This way, you can really make sure what a string is used for when you're not sure about how to translate it! How cool is that again? :D

Actually, I personnaly would have loved some logical module-like grouping of the strings to make usage a little clearer without looking at the sources so often... but hey, the gettext system has enough other advantages for me to forget about this little itch ;)

Comments from long ago:#

Internationalizing web applications using gettext in PHPAs I have said before, gettext is a very interesting framework for i18n and i10n.

Now the question is, how do I apply this to web applications? Actually, I’m going to restrict my discussion here to PHP since this is what I’m working with right now…

his way, you can really make sure what a string is used for when you’re not sure about how to translate it! How cool is that again?