I just surrendered to my geekyness again. I’m passing my iPod photo over to my girlfriend, so I had to buy a new iPod for me. Or maybe it was actually the other way round? :roll:

Oh well… let’s just pretend I got an iPod video for my birthday! :D

First contact at the dealer: I was really surprised by the size of the packaging! It’s barely larger than a double CD jewel case! I first found it pretty cool because it optimizes shipping… thus uses less fossile energies… okay I disgress… the point is: later in the evening it dawned on me: Apple just did it again!

This is how they manage to keep the same price tag when adding core functionnality… and they raise their margins at the same time!! (Those accessories are so insanely overpriced when purchased separately!) Guess, there’s yet another Apple marketing lesson to be learned here…

I have to admit that I barely ever used the power adapter on mt iPod photo since I’ve been charging it via the USB connection all day long. Still it was comforting to know that if I ever took a vacation (yeah like that’s gonna happen anytime soon…) I had what is needed to get uninterruped music… (though not uninterrupted podcast streams, but that’s another story…)

Also, I’m a little bit worried that with watching videos which keeps the screen backlight on for significantly longer periods of time, it will drain the battery even faster than before. On the other hand, the new battery “might” last longer than before.

And it doesn’t stop there: Apple has also removed the user manual from the box and the remote controller port from the iPod itself. And you know what else they removed? Firewire! Yes, that’s right, they removed firewire support completely. When you connect your 19 € worth firewire cable, the iPod screen will turn to “You can’t use a firewire cable with this iPod!” :(

The sad thing is that my 35 GB of music are stored on my older PC which has large ard drives, but no USB2 port. It had a firewire card though… which made the trick pretty darn well until now!

So I had to sync the iPod via USB1! Oh no… it would normally take about 10 hours to copy the 35 GB down to the pod at USB1 speed… so I’ve left it transfering overnight…

Then of course Murphy’s law kicked in: Windows Update decided it would be a good idea to reboot in the middle of the night. So I had to do it all again and leave the iPod at home today (with Zone Alarm’s internet lock ON so ). I wasn’t finished when I got back from work… but eventually completed all right. Let’s see the bright side: I finally found a use for Zone Alarm’s internet lock: preventing Windows Update from attempting any funky update when you don’t want it to! :P

First there is a sleeve included so you can protect that scratch-me-baby-I-love-that plastic when the iPod is in your pocket: 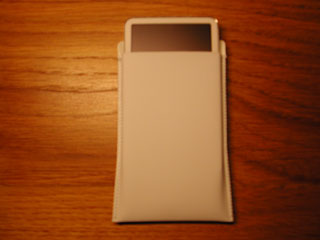 I’m not sure it’s very convenient to adjust the volume with that thing on though… I’d like to rant about how much I’d like a volume control on the headset but I said: enough! :-/

First thing I tried, even before synching my music was to put some video onto the pod. That’s a pain in the pass. It didn’t accept any of my quicktime MOV files. And although iTunes could play them well it wouldn’t even attempt to convert them so the iPod could.

So I subscribed to a video podcast… and… several… dozens… of… minutes… later… I finally had a 5 minute clip to look at on the iPod. Awesome! Really nice screen! Really fluid motion. And easy navigation control. B)

I’m definitely going to enjoy those videos… but again… why isn’t there a video cable included so I can connect to my TV? Bleh… I know… marketing…

The coolest stuff anyway is the new form factor: same 60 GB capacity but thinner! Same overall width and height but larger screen! I wonder why they made the click wheel smaller though… is it easier to manipulate? Or does it just make the screen look bigger??

The larger screen is the killer feature for me: easier to locate podcasts (or songs) in long lists, larger pictures/cover art… and… you can finally see the lyrics for the song you’re currently playing. Yeah! :D

Conclusion: this upgrade from a 4 months old iPod is totally not worth the price for anyone with reason… but it’s just as exciting as my first iPod for the geek inside of me. I fear I’ll upgrade again when the next one comes out… (WiFi anyone?)

Comments from long ago:#

They are nice, aren’t they? But my screen has scratched after a whole three weeks of use. I’m not happy. But apple didn’t give me any hassle, and they’re going to replace it - apparantly.

Also you offically need Quicktime Pro to make the videos the right format, but after I’d purchased it, I found some software that did the same thing, only ten times quicker - for free. Bah!

I’m saving my money for one of these now. It will be my first iPod ever. I’m also building up my iTunes library, adding all my cds, complete with cover art and lyrics. There are some nice free tools for the mac that make iPod compatible video from downloaded files (ffmpegx) or DVDs (Handbrake). iMovie also does it for my home movies.

I don’t know how they do it, apple redefine style every time they release a new version of the ipod.

The removal of the remote functions sucks big time. I listen on Tokyo Subways and there is no room reach down and adjust the volume using the main control. If I had know about the lack of remote I would have got a second hand photo. Apple seems to be learning from M$, remove functions and call it progress.

hi, Can I upgrade my iPod photo to ipod video using some software?

Can I use iPod video in my iPod nano?

to vinay, may be you can use iPod Photo Slideshow?C see it at

to correct you francois, you can get video on to the ipod nano and the photo, even the older black and white ones for that matter. Do a little studying and digging on this site and you will wish you never sent that ipod photo away, well minus the bigger screen, i do like that part